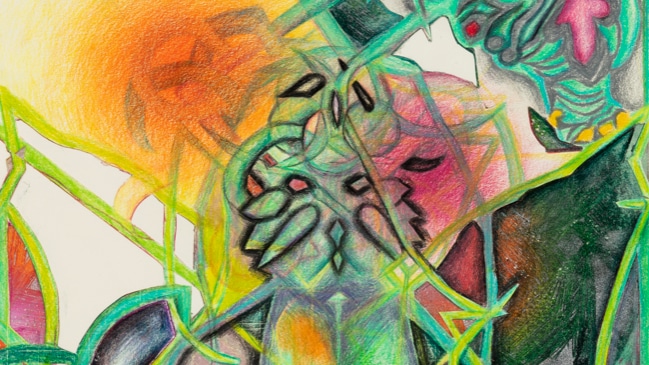 Over the past twenty years, Berlin and New York based painter Kerstin Brätsch has developed a distinctive way of working with which she continually expands the medium of painting, redefining and interpreting it time and again by including performances, artistic interventions, and installations. Besides her regular collaboration with other artists such as Adele Röder (DAS INSTITUT), Debo Eilers (KAYA) and Ei & Tomoo Arakawa (UNITED BROTHERS), she also draws on traditional artisanal techniques, some of which have been forgotten, in order to reveal painting’s metaphysical and animistic qualities in a humorous manner.

Para Psychics, her most recent series, continues this exploration, albeit in a modified form. During the first Corona lockdown in New York, Brätsch transposed her largescale and collaborative practice into an inwardlooking process of drawing on a daily basis. In the period between January 2020 and March 2022, she created one hundred Mandalalike drawings in a time in which she intensively pursued mysticism, tarot, plant medicine and deities like the Sumerian sky goddess Inanna. Die Sein: Para Psychics at the Ludwig Forum Aachen presents all one hundred drawings from this series for the first time in a sitespecific installation of transparent spatial structures juxtaposed against tinted window panes which manipulate the sunlight, creating a unique atmosphere for the viewer. Her exploration of painting in relation to the body, be it the social, physical or psychic, is continued in the drawings as a journey into the mental body. Distributed across the museum walls and metal structures, the drawings evoke abstracted fortunetelling, laid out in a way that visitors can interpret and wander through them.

TAU (Resurrection); “Flow directly implicates not one but several bodies” (Plasmastate); The Call; So as a Female Bird? (The High Priestess); Channeling; *Shapeshifter, Direct Action as a Means of Escaping Fate (Medea); Soulmate; Pharmaceia (Christa’s Blutbild—Can’t Describe It More Closely); Blut (That Abrupt and Heavy Falling); Von Geistern geworfen [Tossed by spirits]; Transitioning (Please Leave a Message); Time breaks down into many times; The Waiting Room … The drawings’ abstract titles consist in part of quotations from essays and publications the artist consulted while working on this project, in part of titles of older works, of references to personal experiences, of madeup names and neologisms, of the names of goddesses, and of concepts from a handbook of German superstitions. These poetic spells and invocations are projected onto a wall, accompanied by a sound sphere composed by Wibke Tiarks. They create a room for rest and rehabilitation, for arrival and departure.

The title of the series references older works by Brätsch, the socalled Psychics (2005–2008), for which she sought out countless fortune tellers in New York. The results of the sessions ultimately provided the starting point for numerous oil paintings—painted, provisional truths that range ambiguously between irony and authenticity. In series like the Psychics, the subsequent Unstable Talismanic Renderings (since 2014), the Blocked Radiants the Fossil Psychics (Stucco Marmo) (since 2017), however, it was the materiality of the works themselves or the associated production processes that opened up links to questions of animism in painting: by building images out of drops (marblings), by sculpted brushstrokes that seem fossilized (stuccos), and through the constant multiplication of her own artistic identity, including old handcrafts and their masters (or in the case of the Psychics, by painting abstract portraits after actual sessions with psychics). After many years of collaborating with artists and craftspeople, Brätsch, however, is inverting this collaborative impetus with the Para Psychics. She no longer generates the means for exploring alternative spheres, temporalities, and personalities by including others or by adopting centuriesold processes, but rather (triggered by her own isolation caused by the lockdown) via/para the multiplicity of her self. The drawings, made using the simplest, readily accessible materials like colored pencils and paper, thus constitute personal concretions of the involuntary pausing during the pandemic. In their formal reference to divination cards, however, they also open up a constant transitionary process of seeing and being. Die Sein is a derivative of the German term “Da Sein”—to be there, to exist, substituting the female “Die/she” for “Da/there.” It refers in addition to the change that the series of drawings represents in Brätsch’s artistic working method: she stresses a personalized, feminized “being there,” where her own mutability, complexity, and multiplicity shifts to the role held by collaborations.

The exhibition will be accompanied by the artist’s book Para Psychics published by Buchhandlung Walther und Franz König. On the occasion of its release, we invite you to a guided tour with Kerstin Brätsch, Kerstin Stakemeier (Professorfor Art Theory and Mediation, Academy of Fine Arts Nuremberg) and Eva Birkenstock on Saturday, September 24, 2022 at 11 am.

The book Para Psychics is available at our museum shop for a special prize of 50,- €.

On Sunday, September 25, 2022, 12 pm Leopold-Hoesch-Museum in Düren presents the exhibition of the Peill prizewinner Kerstin Brätsch Sein (through January 8, 2023).