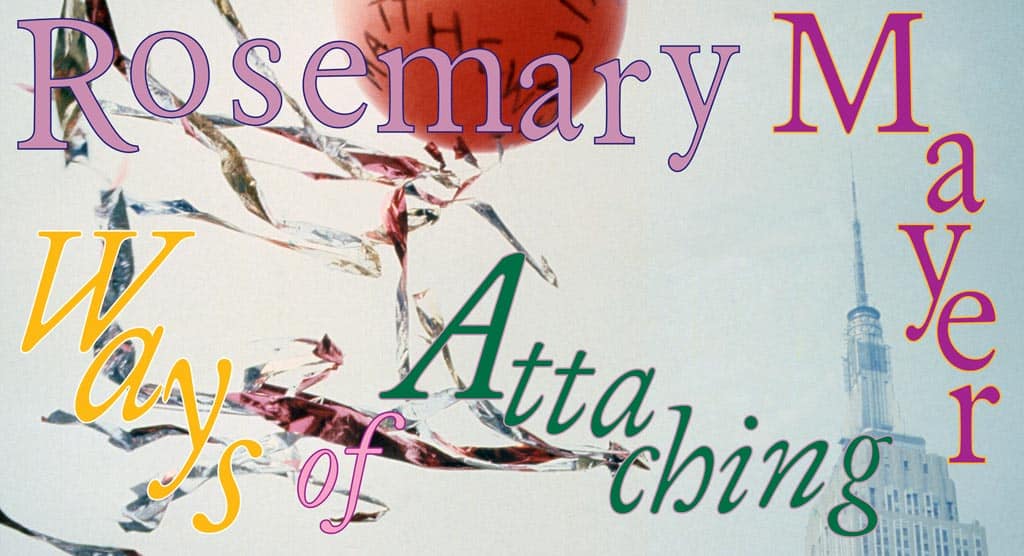 Ways of Attaching is the first institutional survey exhibition by the American artist Rosemary Mayer (1943-2014). The exhibition provides extensive insights into Mayer’s body of work over four decades: ranging from early conceptual experiments of the late 1960s, to textile sculptures and drawings made in the early 1970s, to ‘temporary monuments’ from 1977-1982. Ludwig Forum’s expanded presentation also includes Mayer’s artist’s books from the mid-1970s, sculptures and works on paper from the 1990s, and book illustrations from the 2000s; all of these have not been exhibited since they were made. Highlighting Mayer’s formal interest in draping, knotting, and tethering, the exhibition focuses on the artist’s process of constructing real and imagined networks and constellations in which friends and historical figures feature in expressions of affinity and attachment.

Ways of Attaching at Ludwig Forum Aachen is the most comprehensive presentation of Rosemary Mayer’s artistic practice to date. Along with her late work, the exhibition comprises all the artist’s preserved textile sculptures, including three prominent ones named after historical female figures: Hroswitha, The Catherines, and Galla Placidia. Originally created in 1972-73 for Mayer’s solo exhibition at the now legendary A.I.R. Gallery, they have been brought together again for the first time since then.

In parallel with the exhibition, two English publications on Rosemary Mayer will be published by Verlag der Buchhandlung Walther und Franz König:

The exhibition and publication project is organized in collaboration with Marie and Max Warsh from The Estate of Rosemary Mayer and in partnership with the Swiss Institute, New York, Lenbachhaus, Munich, and Spike Island, Bristol.

The exhibition and publications have been generously supported by the Peter and Irene Ludwig Foundation, Kunststiftung NRW, and the Terra Foundation.

Rosemary Mayer (1943-2014) was a prolific artist involved in the New York art scene beginning in the late 1960s. She was a founding member of A.I.R. Gallery, the first cooperative gallery for women in the U.S., and had one of the earliest shows there. During the 1970s and 1980s her work was shown at many New York alternative art spaces, including The Clocktower, Sculpture Center and Franklin Furnace, as well as in university galleries throughout the country. In 1982, her translation of the diary of Mannerist artist Jacopo da Pontormo was published along with a catalogue of her work. Recent exhibitions of Mayer’s work have taken place at Southfirst, Brooklyn (2016), Lamar Dodd School of Art at the University of Georgia (2017), ChertLüdde, Berlin (2020) and Gordon Robichaux, New York (2021). Her work was included in the exhibitions Bizarre Silks, Private Imaginings and Narrative Facts, etc. curated by Nick Mauss at Kunsthalle Basel (2020), and most recently in Greater New York at MoMA PS1 (2021/2022).